FREE KINDLE DOWNLOADS Grab these quickly ~ they are limited time offers! Some of these books have been available for awhile and could expire unexpectedly. Check to be sure they're free before you click 'download'.

Margaret Daley is an award winning, multi-published author in the romance genre. One of her romantic suspense books, Hearts on the Line, won the American Christian Fiction Writers’ Book of the Year Contest. Recently she has won the Golden Quill Contest, FHL’s Inspirational Readers’ Choice Contest, Winter Rose Contest, Holt Medallion and the Barclay Gold Contest. She wrote for various secular publishers before the Lord led her to the Christian romance market. She currently writes inspirational romance and romantic suspense books for the Steeple Hill Love Inspired lines, romantic suspense for Abingdon Press and historical romance for Summerside Press. She has sold eighty-three books to date.

Margaret was the president of American Christian Fiction Writers (ACFW), an organization of Christia writers with over 2300 members. She was one of the founding members of the first ACFW local chapter, WIN in Oklahoma. She has taught numerous classes for online groups, ACFW and RWA chapters. She enjoys mentoring other authors.

Until she retired a few years ago, she was a teacher of students with special needs for twenty-seven years and volunteered with Special Olympics as a coach. She currently is on the Outreach committee at her church, working on several projects in her community as well as serving on her church’s vestry.

On a more personal note, she has been married for over forty years to Mike and has one son and four granddaughters. She treasures her time with her family and friends. 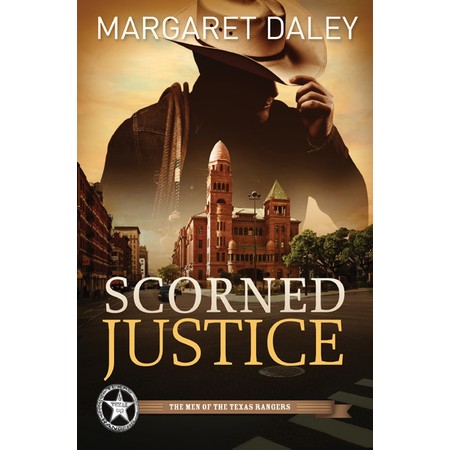 Texas Ranger Brody Calhoun is with his parents in west Texas when an unexpected attack injures the brother of Rebecca Morgan, Brody's high school sweetheart. The local sheriff, a good friend, asks for Brody's help. At first, it seems like an open-and-shut case. However, as Brody digs deeper, he realizes the attack may be related to an organized crime trial Rebecca will be overseeing. With Rebecca's help, he compiles evidence which involves cattle rustlers, bribery, and dirty payoffs that shatter the entire community and put Rebecca directly in the line of fire.

If you would like to read the first chapter of Scorned Justice, go HERE.

First of all, let me say that I love Margaret Daley and have for a long time. As a former first reader for Harlequin/Steeple Hill I read most of Daley's Love Inspired Suspense's. Until I received Scorned Justice to review I didn't realize she had a new line of books with Abingdon Press. Along with Scorned Justice I received Saving Hope to read. Both books were awesome. They had everything I love in a book, suspense, family drama, a bit of romance, and a handsome man of the law!

In this series we meet some Texas Rangers that would make any woman feel safe. Daley weaves together a story so tightly wound with suspense and tension that I couldn't put either book down--I read both stories in a two day period. I hope this is a series she keeps going for a while as I can't get enough of these well developed characters.

FYI: The books are complete stand alone stories. You can read them in any order as they are not a continuation series.

Sabrina L. Fox
I'm a wife and mother who works outside the home. I'm also a freelance journalist and first reader for a major New York publisher. I've completed one book Prescription for Murder, and rewritten and retitled it as Malicious Intent. I'm getting ready to submit a proposal for my second book, Rock Bottom, a 2007 ACFW Genesis Chick-Lit finalist, and Inn for a Penny.